A New Wave: Transforming Our Understanding of Ocean Health


Solar-powered and infused with AI technology, the autonomous Mayflower will support extensive research on the ocean’s health.

Humans have been plying the seas throughout history. But it wasn’t until the late 19th century that we began to truly study the ocean itself. An expedition in 1872 to 1876, by the Challenger, a converted Royal Navy gunship, traveled nearly 70,000 nautical miles and catalogued over 4,000 previously unknown species, building the foundations for modern ocean science.

Today, with human activity impacting ocean health, disrupting climate patterns and destroying ecosystems, the need for oceanographic data and the ships that collect them has never been greater. But ocean exploration is labor-intensive, expensive and sometimes dangerous. And with COVID-19 adding to the challenges by disrupting manned marine research missions, it’s clear we need new approaches to understanding and conserving one of the world’s most important resources.

Fortunately, the growing maturity of autonomous technologies offers a potential path forward. IBM is supporting the marine research organization Promare by providing the advanced technologies for the Mayflower Autonomous Ship. Named after another famous ship from history, but very much future focused, the autonomous Mayflower will use machine learning and energy from the sun to independently traverse the ocean, gathering and transmitting vital data to expand our understanding of the factors influencing its health.

This new ship, which takes to the water for the first time in September, represents not just the future of marine exploration, but a fundamental shift in our overall approach to oceanographic research.

The Real Lungs of the Planet?

According to a special report from the UN Intergovernmental Panel on Climate Change, our oceans are warmer, more polluted, more depleted and more unpredictable than ever before. Every year, an estimated eight million metric tons of plastic finds its way into the ocean, infiltrating food chains and threatening marine life. And by absorbing excess carbon dioxide (CO2) created by human activity, the ocean is growing ever more acidic, impacting some species’ biological development and destroying important habitats like coral reefs.

There are serious consequences for life on land too. While the global importance of the Amazon rainforest is undoubted, the ocean, and the oxygen-emitting phytoplankton that live in it, can make a greater case for being called the “lungs of the planet” producing about half of the air we breathe. Then there’s the economic value of marine and coastal industries worth approximately $3 trillion a year.

A Decade of Ocean Science

Recognizing the importance of the ocean and the threats it faces, the United Nations has proclaimed the 2020s to be the Decade of Ocean Science for Sustainable Development. Bringing together a range of scientific disciplines, policy makers and industry partners, the initiative will provide a framework for better understanding and managing marine environments.

Calling for new collaborative partnerships, the UN believes the private sector has a big part to play, particularly when it comes to developing autonomous technologies that can continue to gather and share data and make ocean science less dependent on costly and risky ocean expeditions by people.

The Role of the Autonomous Mayflower Ship 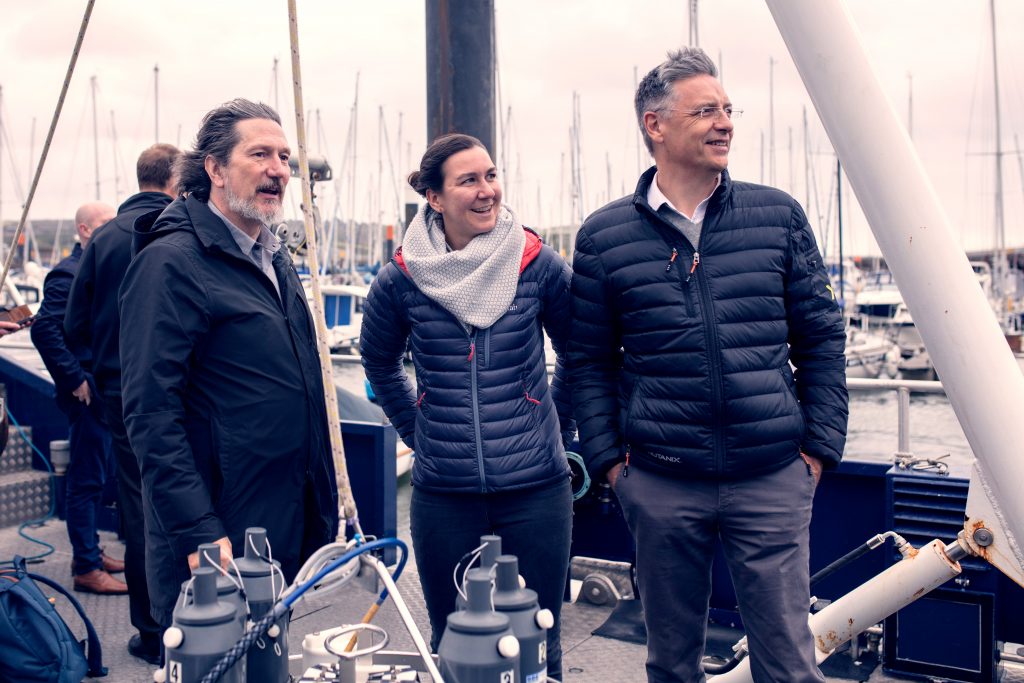 That’s why, answering the UN’s call, IBM is supporting Promare by providing the technologies for the Mayflower Autonomous Ship (MAS).

Using an innovative new “AI Captain,’’ built by Promare’s engineers by combining IBM’s AI, edge technologies and data from IBM’s the Weather Company, MAS can identify and avoid hazards as it self-navigates at sea.

IBM and Promare researchers are also pioneering new AI-powered approaches for the collection and in-situ analysis of samples and ocean data to better understand everything from water quality to what whale songs can tell us about marine mammal populations. One of those includes a specially adapted version of an electronic AI-assisted “tongue,” which enables rapid chemical characterization of liquids, such as ocean water, using combinations of many sensors in an array.

In the future, networks of autonomous research boats, drones and submersibles could spend as long as six months at sea, generating data every day, looking beyond seasonal variability to better identify and respond to long-term trends. They will work in tandem with human oceanographers but allow the experts to spend more time on data interpretation and action rather than data collection.

Beyond the research itself, MAS will help fulfill another important objective: engaging the public. Ultimately, it will take a collective effort to shift the current environmental trends. The story of the ship, the fusing of past, present and future, and the information shared globally about its mission, means that MAS will help to increase the public awareness of issues related to ocean health.

It’s Not Too Late

Ocean science has seen huge progress since the Challenger Expedition of 150 years ago. But there are still significant gaps. Today only about 20-30% of the ocean floor is mapped, and even then at only a blurry 100-meter resolution. The ocean has an incredible ability to regenerate itself. But unless we improve our understanding of ocean health, leveraging technology to help us do so sustainably, we risk setting off a chain of degradation from which it will be almost impossible to recover.

Despite the damage, it is not too late to save our seas. For the first time in history, we have at our disposal a set of technologies that can completely transform our ability to—in the UN’s words—”gather the data we need, for the ocean we want.”

That’s why we need collaboration and investment from across public and private sectors, as well as public engagement and some of the same pioneering spirit that inspired the famous voyages of the HMS Challenger and the original Mayflower.

The post A New Wave: Transforming Our Understanding of Ocean Health appeared first on THINK Blog.

Call for Code for Racial Justice Needs You: Join the Movement

State of AI Report 2022: Be Prepared for Next Year

State of AI Report 2022: Be Prepared for Next Year

What Can AI-Powered RPA and IA Mean For Businesses?

From Data to Verse: KDnuggets and ChatGPT in Conversation

Want to get a quick and profound overview of the 42 most common used Machine Learning Algorithms? | by Murat Durmus (CEO @AISOMA_AG) | Jan, 2023