Medical imaging techniques like computed tomography (CT), magnetic resonance imaging (MRI), medical x-ray imaging, ultrasound imaging, and others are commonly used by doctors for various reasons. Some examples include detecting changes in the appearance of organs, tissues, and vessels, and detecting abnormalities such as tumors and various other type of pathologies.

Before doctors can use the data from those techniques, the data needs to be transformed from its native raw form to a form that can be displayed as an image on a computer screen.

This process is known as image reconstruction, and it plays a crucial role in a medical imaging workflow—it’s the step that creates diagnostic images that can be then reviewed by doctors.

In this post, we discuss a use case of MRI reconstruction, but the architectural concepts can be applied to other types of image reconstruction.

Waiting times for tests like MRIs and CT scans have increased rapidly in the last couple of years, leading to wait times as long as 3 months. To ensure good patient care, the increasing need for quick availability of reconstructed images along with the need to reduce operational costs has driven the need of a solution capable of scaling according to storage and computational needs.

In addition to computational needs, data growth has seen a steady increase in the last few years. For example, looking at the datasets made available by the Medical Image Computing and Computer-Assisted Intervention (MICCAI), it’s possible to gather that the annual growth is 21% for MRI, 24% for CT, and 31% for functional MRI (fMRI). (For more information, refer to Dataset Growth in Medical Image Analysis Research.)

In this post, we show you a solution architecture that addresses these challenges. This solution can enable research centers, medial institutions, and modality vendors to have access to unlimited storage capabilities, scalable GPU power, fast data access for machine learning (ML) training and reconstruction tasks, simple and fast ML development environments, and the ability to have on-premises caching for fast and low-latency image data availability.

This solution uses an MRI reconstruction technique known as Robust Artificial-neural-networks for k-space Interpolation (RAKI). This approach is advantageous because it’s scan-specific and doesn’t require prior data to train the neural network. The drawback to this technique is that it requires a lot of computational power to be effective.

The AWS architecture outlined shows how a cloud-based reconstruction approach can effectively perform computational-heavy tasks like the one required by the RAKI neural network, scaling according to the load and accelerating the reconstruction process. This opens the door to techniques that can’t realistically be implemented on premises.

The data layer has been architected around the following principles:

The following diagram illustrates this architecture.

This approach uses the following services:

The following figure shows a concise architecture describing the data exchange between the cloud environments.

Using Storage Gateway with the caching mechanism allows on-premises applications to quickly access data that’s available on the local cache. This occurs while simultaneously giving access to scalable storage space on the cloud.

With this approach, modalities can generate raw data from acquisition jobs, as well as write the raw data into a network share handled from Storage Gateway.

If the modality generates multiple files that belong to the same scan, it’s recommended to create a single archive (.tar for example), and perform a single transfer to the network share to accelerate the data transfer.

The data decompression layer receives the raw data, automatically performs decompression, and applies potential transformations to the raw data before submitting the preprocessed data to the reconstruction layer.

The adopted architecture is outlined in the following figure. 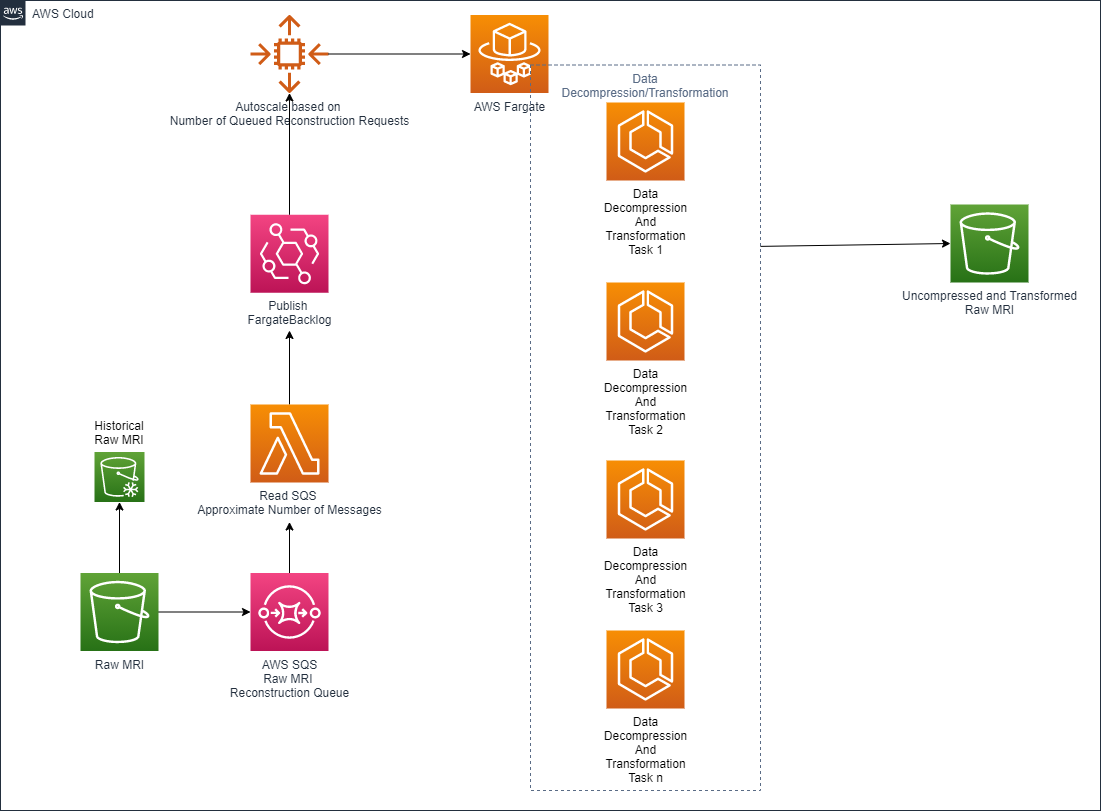 An AWS Lambda function retrieves the raw MRI Amazon SQS queue depth, which represents the amount of raw MRI acquisitions uploaded to the AWS Cloud. This is used with AWS Fargate to automatically modulate the size of an Amazon Elastic Container Service (Amazon ECS) cluster.

This architecture approach lets it automatically scale up and down accordingly to the number of raw scans landed into the raw input bucket.

After the raw MRI data is decompressed and preprocessed, it’s saved into another S3 bucket so that it can be reconstructed.

The following figure shows the architecture that realizes the neural model development and container creation. 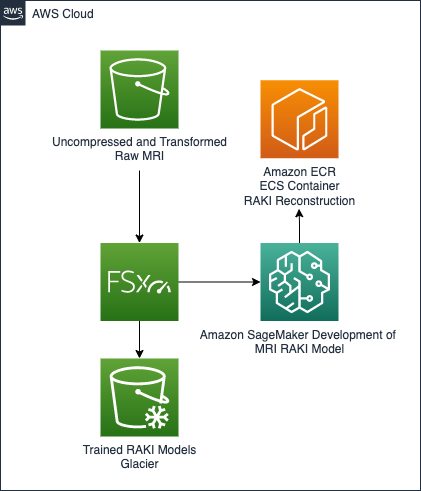 In this architecture, Amazon SageMaker is used to develop the RAKI neural model, and simultaneously to create the container that is later used to perform the MRI reconstruction.

Then, the created container is included in the fully managed Amazon Elastic Container Registry (Amazon ECR) repository so that it can then spin off reconstruction tasks.

Fast data storage is guaranteed by the adoption of Amazon FSx for Lustre. It provides sub-millisecond latencies, up to hundreds of GBps of throughput, and up to millions of IOPS. This approach gives SageMaker access to a cost-effective, high-performance, and scalable storage solution.

The MRI reconstruction based on the RAKI neural network is handled by the architecture shown in the following diagram. 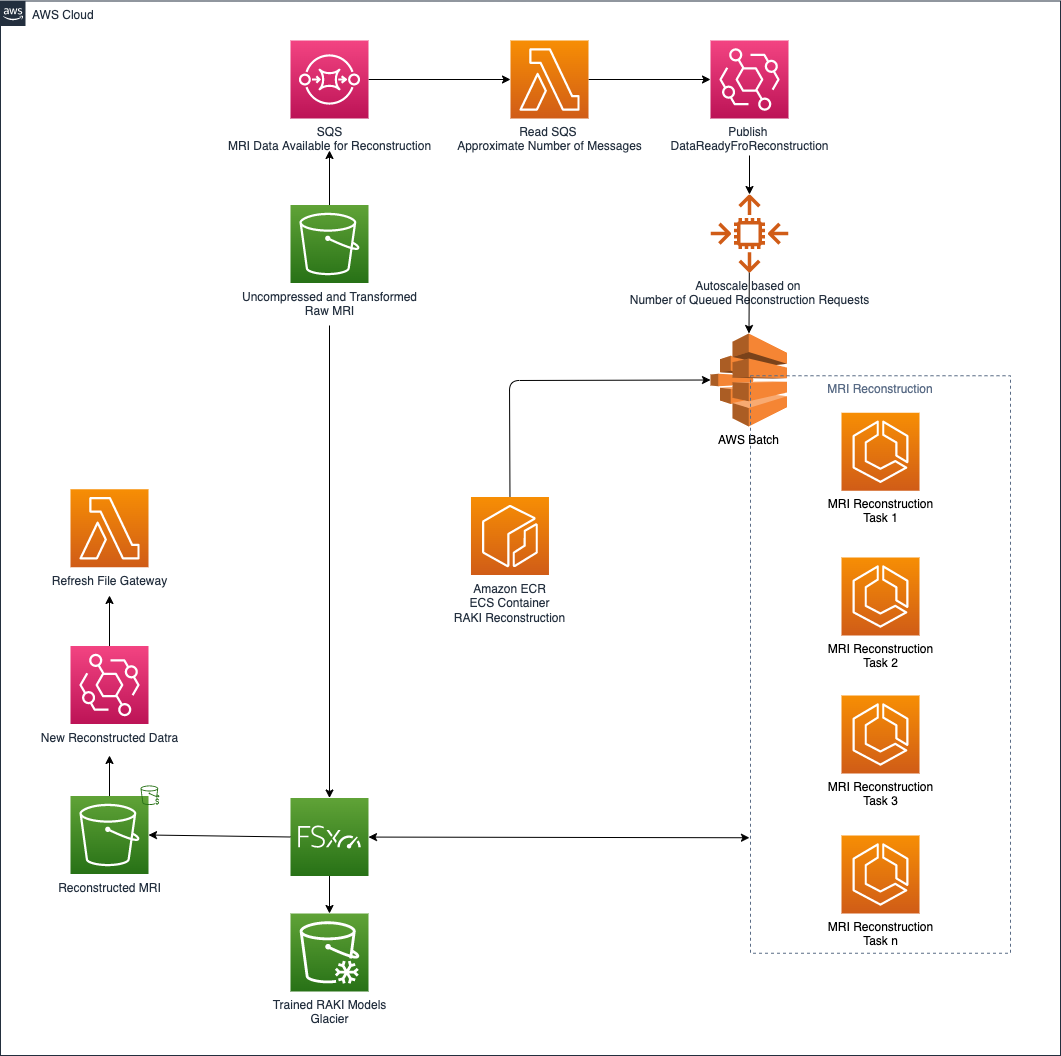 With the same architectural pattern adopted in the decompression and preprocessing layer, the reconstruction layer automatically scales up and down by analyzing the depth of the queue responsible for holding all the reconstruction requests. In this case, to enable GPU support, AWS Batch is used to run the MRI reconstruction jobs.

Amazon FSx for Lustre is used to exchange the large amount of data involved in MRI acquisition. Furthermore, when a reconstruction job is complete and the reconstructed MRI data is stored in the target S3 bucket, the architecture employed automatically requests a refresh of the storage gateway. This makes the reconstructed data available to the on-premises facility.

The overall architecture is shown in the following figure. 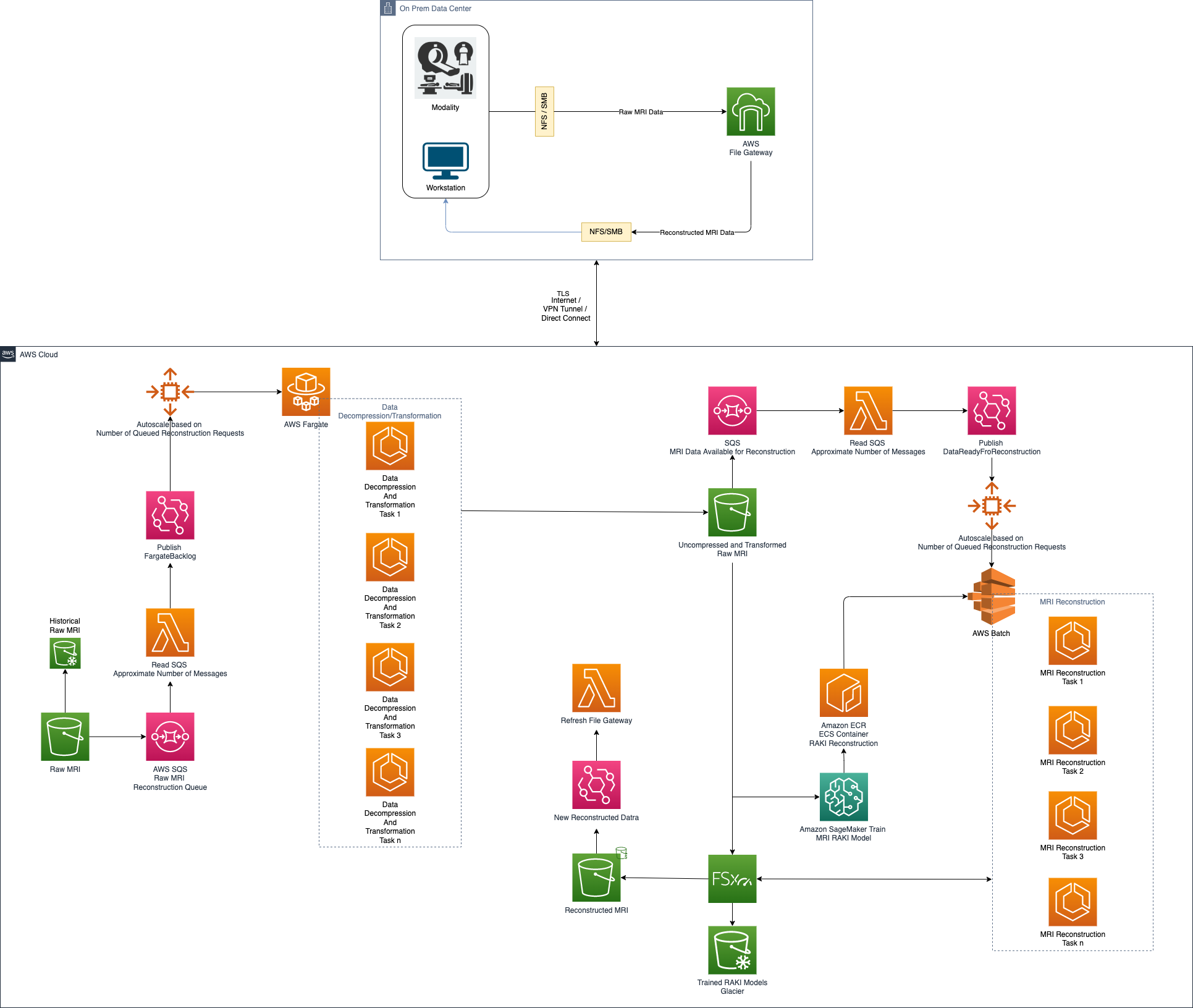 We applied the described architecture on MRI reconstruction tasks with datasets approximately 2.4 GB in size.

The reconstruction, after the RAKI network has been trained, took an average of 40 seconds on a single node equipped with a Nvidia Tesla V100-SXM2-16GB.

The application of the preceding architecture to a reconstruction job can yield the results in the following figure. 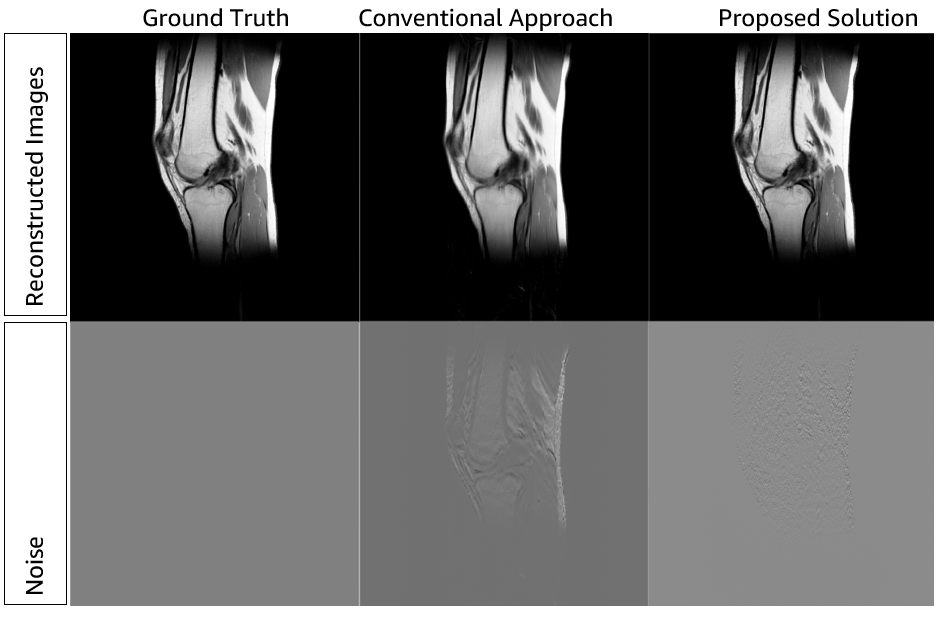 The image shows that good results can be obtained via reconstruction techniques such as RAKI. Moreover, adopting cloud technology can make these computation-heavy approaches available without the limitations found in on-premises solutions where storage and computational resources are always limited.

With tools such as Amazon SageMaker, Amazon FSx for Lustre, AWS Batch, Fargate, and Lambda, we can create a managed environment that is scalable, secure, cost-effective, and capable of performing complex tasks such as image reconstruction at scale.

To learn more about how AWS is accelerating innovation in healthcare, visit AWS for Health.

The Benefits of Machine Learning for the Renewable Energy Sector | by Nicholas Lewis | Jul, 2022

ALL ABOUT DISTANCES. EUCLIDEAN DISTANCE: | by Atulanand | Sep, 2022

A Few Tools That Help Machines to Learn | by Swapnil Chavan | Aug, 2022